One of the challenges of sorting through the estate of family members that loved buying antiques is figuring out which items are actual family memorabilia and which items are just things they picked up at flea markets and junk stores.

When we were sorting through everything, we spotted the monogrammed H on a pair of tarnished spoons and set them aside in case the H stood for Harmon. The spoons had a date engraved on them, which we figured would help us decipher their history. 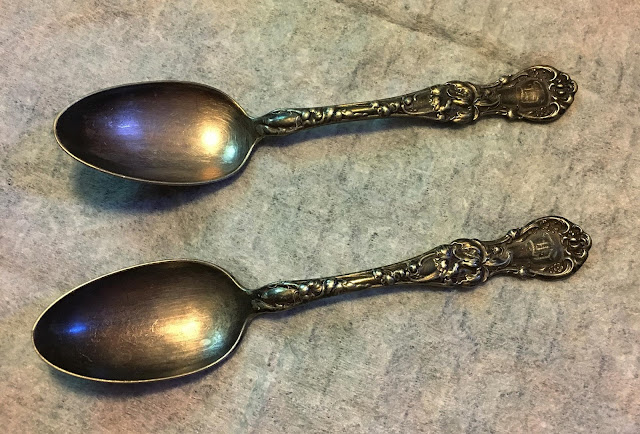 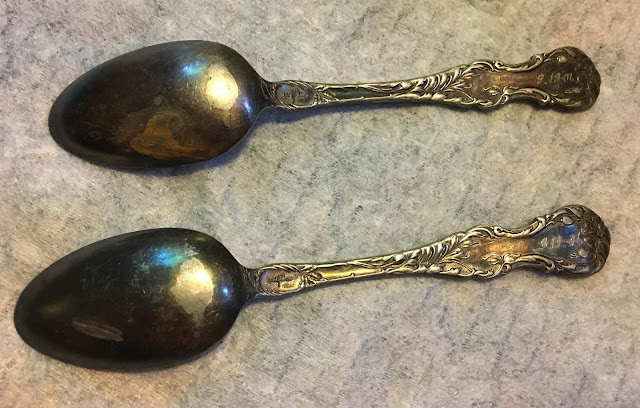 Since then, as I've been working through the family archived and genealogy, I've become familiar with the significant dates in the Harmon family tree. When I looked again at the spoons last weekend, I immediately knew what they were.

The date engraved on the spoons is September 19, 1906 (9.19.06). That's the day that Edward Harmon married Mollie Carson in her parent's home at Hughesville, Missouri. Ten years later, Mollie gave birth to their only child, James, who would eventually become my grandfather. 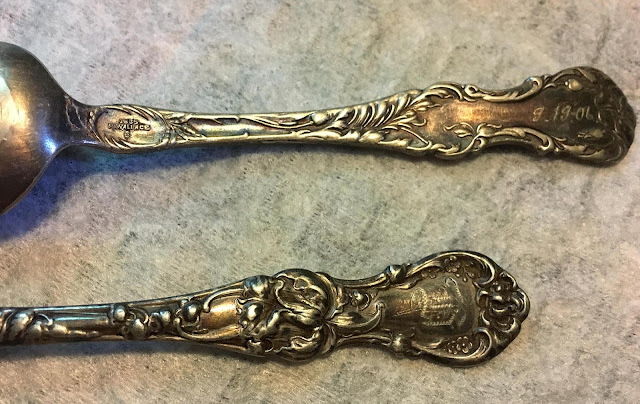 Hughesville, Missouri today is a tiny village, with fewer than 200 people. It was founded in 1871, located on a branch of the Missouri Pacific railroad line, with a small post office and general store. During its early years, the village's prominent citizens included immigrants from Scotland and Germany, as well as migrants from Eastern states like Kentucky.

Mollie's father, James Carson, was an Irish immigrant who worked as a farm laborer in Hughesville (1900 Census). Her mother, Narcissa Garner Carson, was only 15 when the couple married in 1860. Mollie, in contrast, was 28 when she married Edward Harmon (who was 38 and divorced).

Edward Harmon's father owned a farm near Kansas, Illinois. Edward and Mollie set up their own home there, and Edward worked as a carpenter. He was also an inventor: he received a patent in 1907 for a Combined Dumping and Platform Elevator.

The spoons were made by the R. Wallace Company of Connecticut, founded in 1835 by Robert Wallace of Prospect, CT. The production of silver-plated flatware was big business in Connecticut during the 1800s and early 1900s, with companies in Waterbury, Wallingford, Meriden, and other cities supplying the country (and the world) with fashionable and affordable utensils. 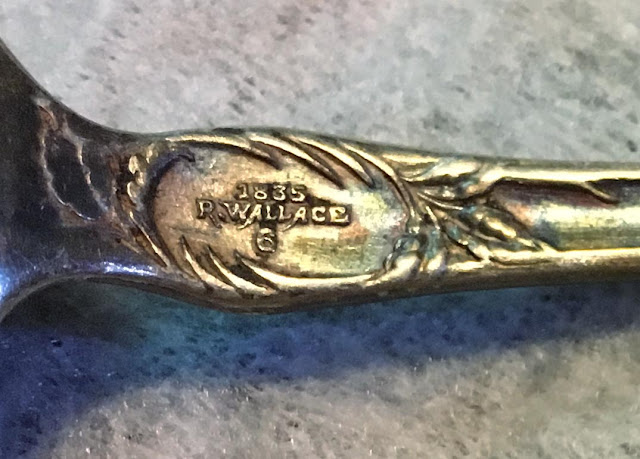 The company that made the Harmon family spoons was R. Wallace & Sons, based in Wallingford, CT.  Flatware marked "1835 R. Wallace" was the most expensive of the Wallace line. An advertisement from 1911 claimed that the 1835 R. Wallace flatware was made with extra silver plate "on the parts most exposed to wear." (McClure's Magazine, Marketplace of the World, April 1911, p. 109)

Kansas, Illinois was a thriving village of 1,500 people in 1905 (Encyclopedia of Illinois and the History of Edgar County, Edited by H. Van Sellar, 1905). The village included a hotel, several stores, electricity and telephone service. The spoons may well have been purchased in Kansas as a wedding gift for Edward and Mollie.

Posted by Raechel Guest at 9:35 PM No comments:

The Perils of Radio

I've finally started going through the Harmon Family archives, sorting and organizing all of the documents, photographs, postcards, and other ephemera, and getting everything placed in archival storage containers. It's a task that will likely take a few years to complete.

Among today's discoveries was a letter written in 1931 to Mollie Harmon by George M. Skinner, who taught Sunday School to Mollie's son James. Skinner apologizes for introducing young James to radio, attributing his low grades to his new hobby. The letter reads:

Read more »
Posted by Raechel Guest at 5:55 PM No comments:

Way back when, my grandfather, Jim Harmon, was a tattoo artist. I'm not entirely certain of the time period, but I think it must have been during the 1930s, when he was in his 20s and living on his own in D.C. The first tattoo he ever created was on his thigh--an easy spot to work on, but he did it right-side-up when he was looking at it--which meant it was upside down for everyone else. He was so embarrassed, he never wore a swimsuit at the beach; instead, he always wore long pants so no one could see his mistake. I never saw the upside down tattoo on his leg, but it's one of the many stories I heard over the years.

One of the coolest things we found in my grandparents' things last year was a small three-ring notebook with 31 pages of tattoo designs drawn my by grandfather. My grandmother had kept it in a trunk full of family memorabilia. Some of the designs are classic naval tattoos, while others hint at my grandfather's interest in Surrealism. 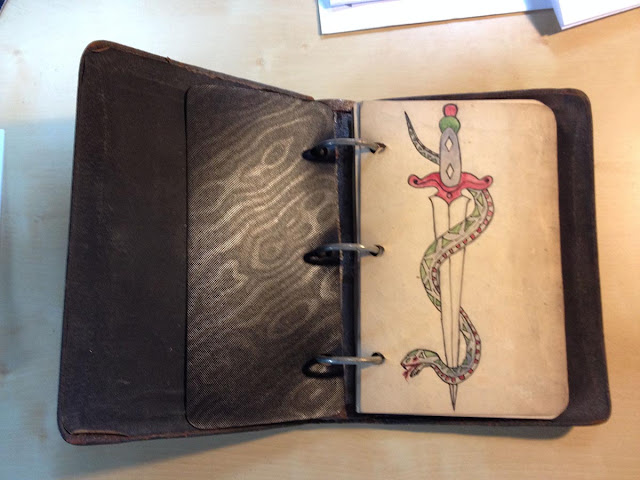 Read more »
Posted by Raechel Guest at 2:48 PM No comments:

The best part of dealing with the estate last year was finding hidden family gems. I knew there was some family material stored on the trailers, and I knew that included some paintings done by my grandfather, James Harmon. I had never seen his artwork, so it was a real treat when we found it.

This is the first of several blog posts featuring my grandfather's artwork. This batch of paintings on canvas were found removed from their stretchers and rolled up together.


Read more »
Posted by Raechel Guest at 2:57 PM No comments:

This is one of my favorite wristwatches, not because it's of any particular importance, but because it embodies both local history and a snazzy design that is best described as '50s bling. (Or maybe late '40s bling.) I love the retro irony--today we would consider this to be a woman's watch, but when it was new, it was decidedly masculine.

Take a look at this watch. It's got a gold-plated case (plain steel on the back), encrusted with 14 fake diamonds; the dial boasts 8 fake diamonds (two are missing) and 5 fake rubies, arranged in an unabashedly tacky design. It's so camp, you have to love it. One final update regarding the estate sale: everything that was left over has been consigned to auction with Cabin Fever in Pennsylvania. It will be sold a little at a time at their monthly auctions.

My life is slowly beginning to return to "normal."

Two years ago, after completing a biography of Boston silversmith George Christian Gebelein for the German Historical Institute's online encyclopedia of German-American Immigrant Entrepreneurs, I agreed to write a similar biography of Dietrich and Frederick Gruen, founders of the Gruen Watch Company.

Being the daughter of a horologist, I felt that I was well suited to the task. I started my research with a visit to my dad's shop, where he pulled out all of his Gruen books, parts, and one lovely pentagon pocket watch that had been hidden away in a parts drawer for decades.

The estate sale is over, but there's still a lot of great stuff left. I'll be updating this website with information about where it is being consigned as that progresses.

A few people asked what happened with the "leftovers" from the earlier sale at my dad's shop. That was all consigned to auction with Cabin Fever in Pennsylvania. They'll be selling it a little at a time every month.

Posted by Raechel Guest at 6:35 PM No comments: